So many stupid people, so little time.


Phew! Scouting around the usual deadbeat kiwi traps, you see so much misinformation, posts by unbelievably stupid people and the usual plain ignorant.

:Ah yes, drag up the old Anzac spirit if it suits your needs. I'll bet this poster has never seen an Anzac dawn service. You do have the right to PR, you just don't want to apply as you'd be rejected.


how is fair to kiwi's in oz?? we pay medicare, taxes etc yet stil its harder for us to become australian citizens why pick us out from the hundreds of other peoples who make aussie home??

Oh god,...taxes again. I'm starting to think we should just call it a stupid kiwi tax. You can apply, as repeated a thousand time. You just won't as you know you will be rejected.


Human Rights are for every country bar New Zealand.....just see what these other countries get on Arrival here..housing,jobs and benefits...migrant centres..the list goes on..even provided with clothing..

Really? Where did  you find this piece of crap? Jobs? Housing? Migrant affairs have been around for years. It's not a branch of centrelink. So what you saying is you want a lot for doing nothing. Priceless!
Posted by NoMoreKiwis at 20:35 No comments:

Someone with a decent view.


I think at the end of the day. This Crusade that groups like OzKiwi are championing are going to go the way of the Maua.
The majority of these people are those who this agreement was supposed to target. Unskilled middle class people that are allowed to come here and make money but are not allowed to get benefits.
They are essentially complaining that they can come here without restriction and work without restriction but don't have a lot of the rights as citizens.
I think the biggest issue is the inconsistency and ambiguity of the Australian government explaining to New Zealanders coming in on the SCV what they are, and this should be done before they board a plane.
Thus I think alot of the frustration stems from an incorrection assumption of what their status really is.
Quite frankly, those who have built up a life here in Australia and subsequently suffered something very unfortunate in their personal circumstances should have known the potential risk and what they wouldn't be entitled too before they board a plan.
There also needs to be solutions for the social ramifications that this visa creates. I find it fair that Kiwis pay tax even if they can't reap the full benefits of our infrastructure. Though there should be an insurance scheme in place that fills the gap of welfare for limited amounts that is specifically targets special condition visas. This should be mandatory or at least encouraged.
There should also be more conditions on the visa. A formal application that includes educating prospective entrants on what their visa is going to entitle them too.
History aside, I think that New Zealanders should not be able to come in to Australia and access the welfare system. The current scheme works excellently by keeping the labour market competitive and not burdening the government with potential welfare cases.
Above all else though, I believe welfare is strangling this country. I don't think NZers are entitled to it like I think half of those on it now aren't entitled to it. It won't get better if we open up the system to another 650,000 potential claimants.
Posted by NoMoreKiwis at 00:06 No comments:

You know what I think our nz accent is closer to British accent.... That's why Australians tease us, pure English as the royal would say lol

Oh really? You obviously haven't yourself or live in some delusion. You don't sound like any other English speaking people. Accents are broadly different. You sound far from "royal" LOL

Is so strange in my eyes theres so many immigrants here that get citizenship how's that and us kiwis are left to the curb.It's there 100 grand they pay to get in with how unfair.


They applied for permanent residency/citizenship and passed. You can apply, you just prefer not to and whine.


Any kiwi who decides to make Australia home knows they are going to have to work to survive, surely that counts in our favour. We've been here 4 months, children with their families arrived last week. Sadly, had to tell them now to go around telling everyone we are from new zealand 'just in case' because there are those who will discriminate against them because of it.

Oh god. Bring on the whole extended family. Little work prospects, mouths to feed and no money for the clapped out Tarago. She should have told them not to come. It's fair to warn those around you that you are kiwis, prepares the neighbours for the frequent "loaning" stuff.


This is the same blurb over and over... Are kiwis REALLY that stupid. Seriously? You can apply like any other foreigner.

This would make your head explode...

Posted by NoMoreKiwis at 21:43 No comments:

Worse reporting at it's best....

New Zealanders aren't know known for much apart from sheep jokes and an unlimited amount of people perfect for roles of peasants and hobbits. They can knotch up poor, misinforming news as well.

Had to add a post that I thought was gold..

Amy Hill Great story TV One!!! I think, one of the best I have seen that portrays the situation right on the button. No elaborate fabrications - dont see a lot of factual unsensationalised reporting these days do we. And again, great work Oz Kiwi in doing such an awesome job.


This should have been the lead post for "Stupid post from stupid people"
Posted by NoMoreKiwis at 21:19 No comments: 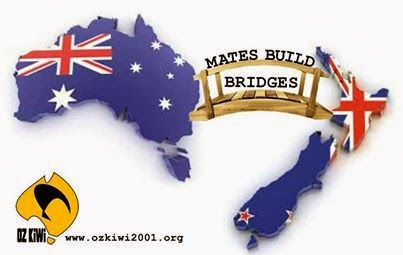 Next pathetic attempt is "Mateship".

I'm not too sure what they're talking about.... as in the "Anzac" tradition?

If all fails..."but aren't we friends?" Drag up the souls of long deceased soldiers for their own twisted means...


What an insult to their memory.

We all know the typical serial pest at some time of our lives. Every neighbourhood has one that moves in . First it's a cup of sugar, then milk, then cigs,  then ....money. Bro, you gotta few bucks?

Kiwis are not my mates, nor the mates of anyone I know. Saying your a mate isn't an excuse to JUST GET WHAT YOU WANT. It's called USING people.

Most logical post to this observed: Na mate, ur dreamin

Posted by NoMoreKiwis at 00:08 No comments:

A FEDERAL MP has called for New Zealand migrants to be given easier access to the dole and other benefits, but with a catch.
Maverick Victorian Labor MP Kelvin Thomson said there would have to be an annual limit on Kiwi migration, otherwise Australia would face a huge influx of jobless people from across the Tasman.
NZ citizens now have unlimited access to live in Australia but those coming now must wait at least 10 years before getting the dole and sickness benefits under a rule introduced in 2001.
More than 600,000 Kiwis, or about 10 per cent of the NZ population, live permanently here, with some 300,000 barred from accessing welfare.
Recent reports said that many were jobless and struggling to make ends meet, with calls for all NZ citizens to be given more rights since they are settled here.
Mr Thomson said that Kiwis should be given permanent residence and welfare entitlements, but only if the trans-Tasman migration agreement was changed to cap annual numbers at between 30,000 to 40,000 people.
Mr Thomson said that his solution was fair because NZ citizens would have more security here and Australia would regain control of its migration program.
Monash University population expert Dr Bob Birrell agreed with changing the welfare entitlements but said the Federal Government should force would-be NZ migrants to apply for permanent residence like others.
"It's a one-way flow, there is only a tiny minority of Australians in NZ, the justification for this policy has long since evaporated" he said.
Dr Birrell said the problem was that Australia had no control over the type of people arriving from NZ, such as those with poor skills who would struggle to find work.

At least this politician recognizes the kiwi problem. He's worked out the main motivation of kiwis seeking permanent residency...Benefits and taxpayer handouts.
Whilst a cap on immigration from across the Tasman is a good start, they really need to reign in the open access to an application process. (Tourist visa or apply for residency FROM new zealand before leaving.

Posted by NoMoreKiwis at 00:50 No comments:

It is not right to condem or kick some one down when they fall on hardship. So to my fellow kiwi's in NZ who make negative comments, keep them to yourselves we don't need your high'n mighty opinions. We have made Oz our home and eventually NZers will win


You chose to make your nest in another persons tree. Cuckoos do the same. No matter how loud you bang on about your ignorant, uneducated choices in life, you pay the price.
The problem with these individuals is that residing here always boils down to the fact of "benefits" when enduring hardship. AKA: Government handouts. You chose to come with no plan for what to do during hard times. One way airfares to Auckland are not expensive. (Actually, some charities have provided the airfare back to nz for these people. Money that could be spent on poor Australian families.)

Posted by NoMoreKiwis at 20:02 No comments: